by Papy.G
Very nice emulator, and it is smart enough to support the same save file behavior as Lameboy, so I can use my SD at home on the cube, and take it on the go with my DS, if only GoombaColor (integrated in the Supercard) would be as smart!
Still have to check if seamless saving can be achieved with GBA games on the SuperCard. (Would be nice if someone can test it with GB/GBA everdrives too)

I've read multi-player cannot be achieved with GBA core, for whatever reason. But what about the GB/GBC core, I'm convinced the GC can handle four at the same time, so can't we have a GBC emulator running four-player carts with link-emulation on one cube?

I think this function only removes the black bars in GBA mode at Full. The Strech mode would not be necessary.

by TheDimensioner
Hey Extrems! I caught the new release (May 26th) on a Brazilian website dedicated to Wii stuff, and I am glad this is being updated! But I also found some issues here. The top portion of the screen makes some sprites weird on some games. I was able to take a few pics of Super Mario Advance 2 using my phone, so you can see what I mean: 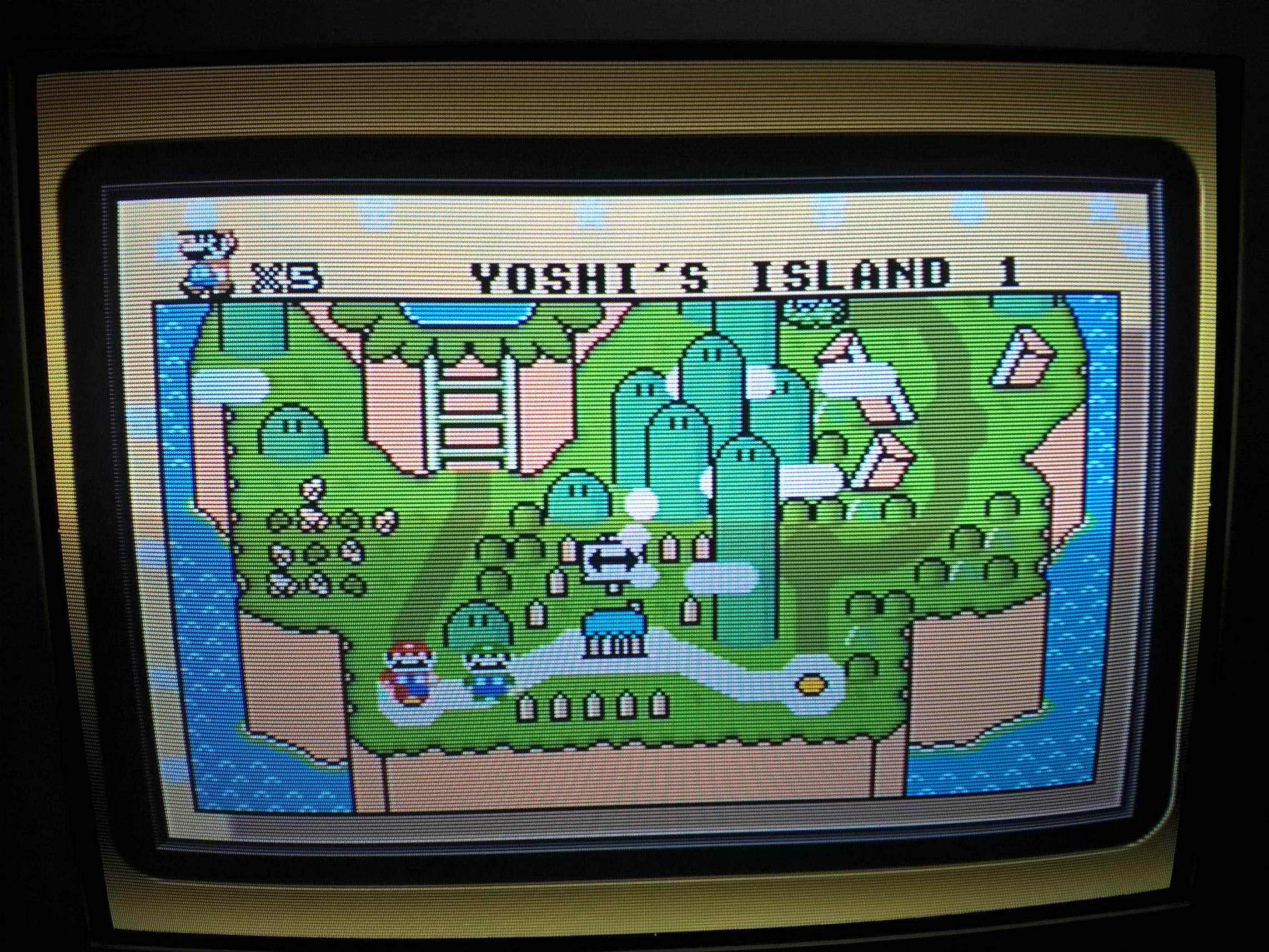 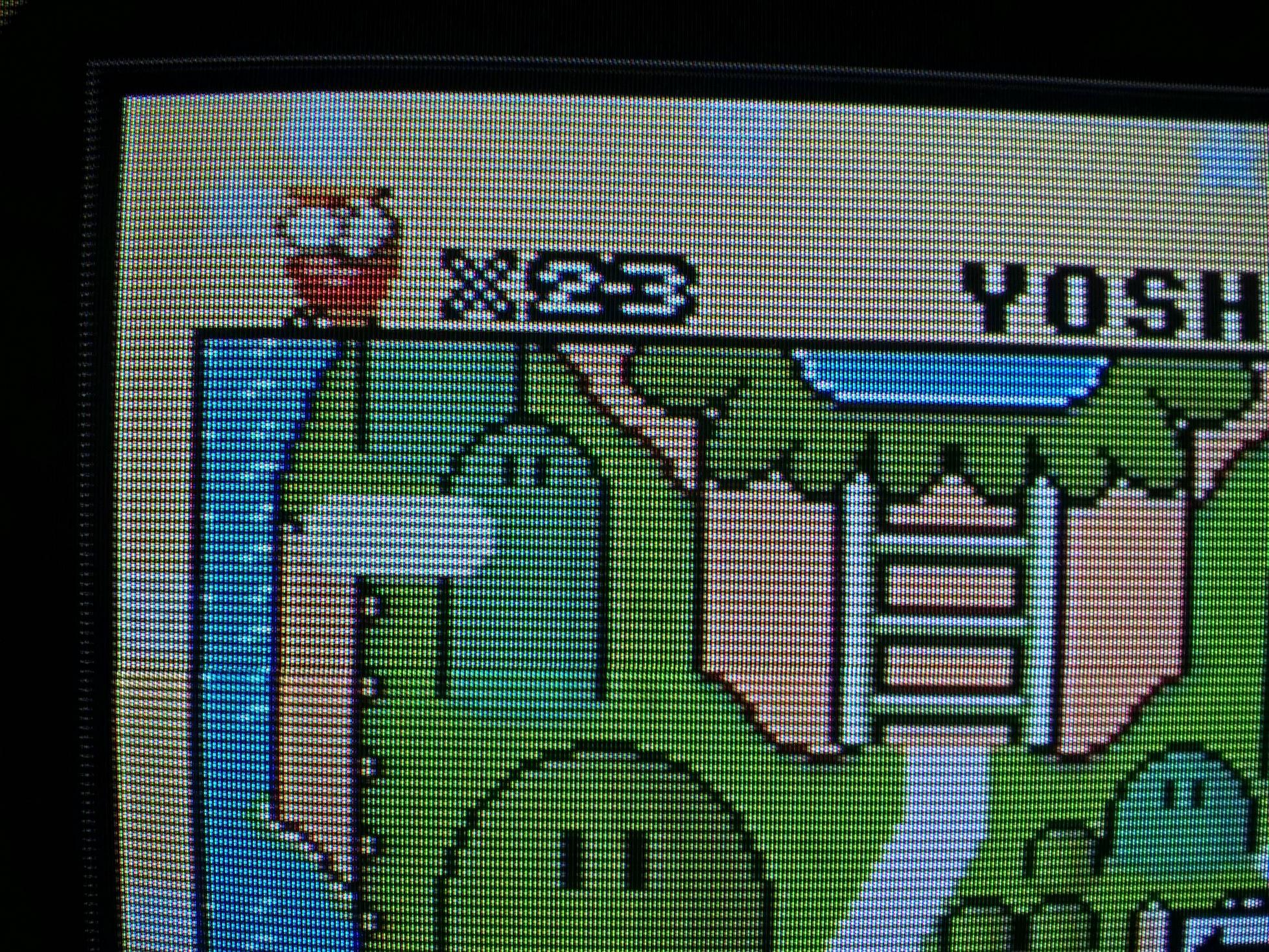 It really depends on the graphic being displayed actually, but once a sprite gets up on those top lines, it gets screwed: 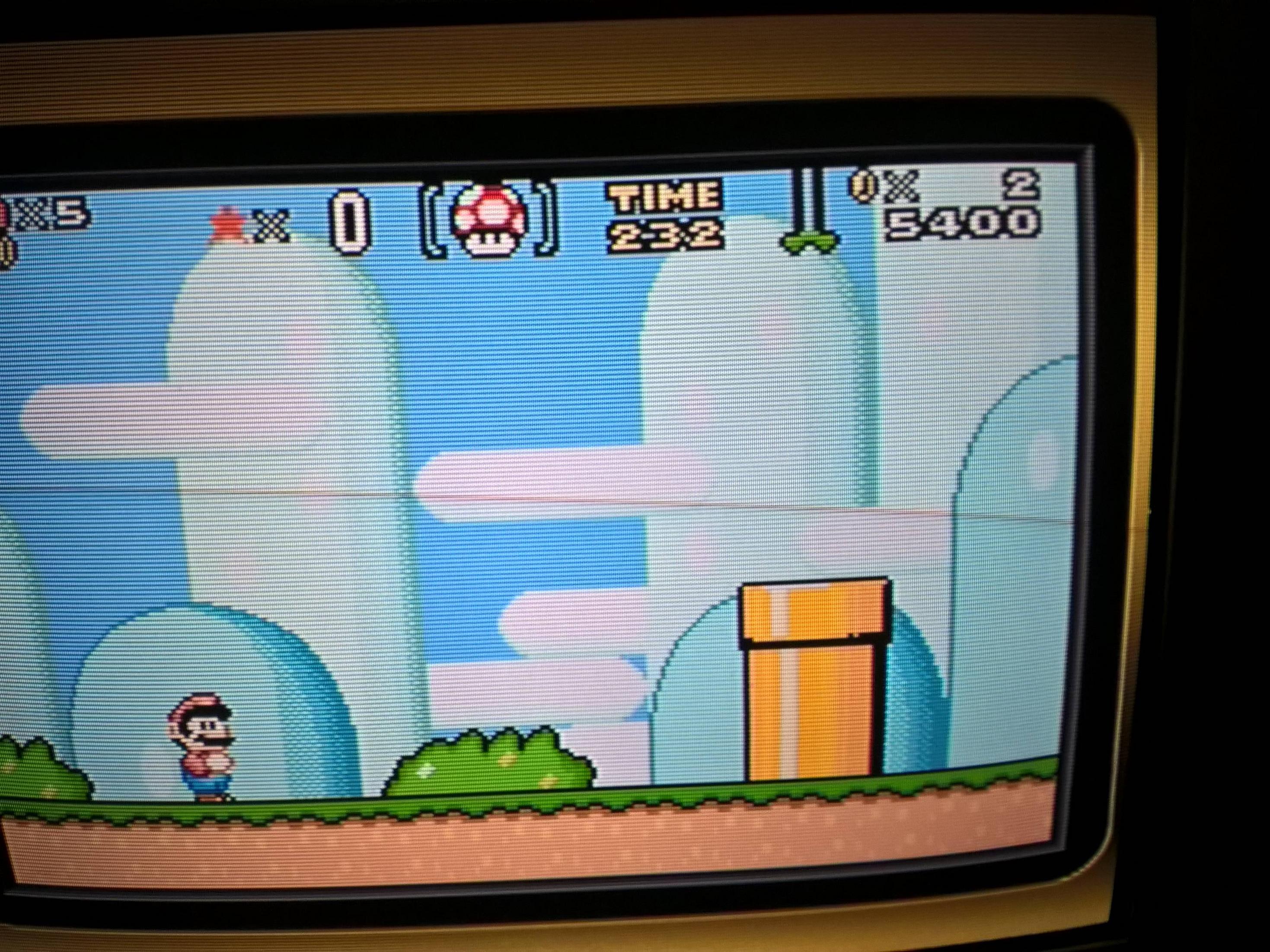 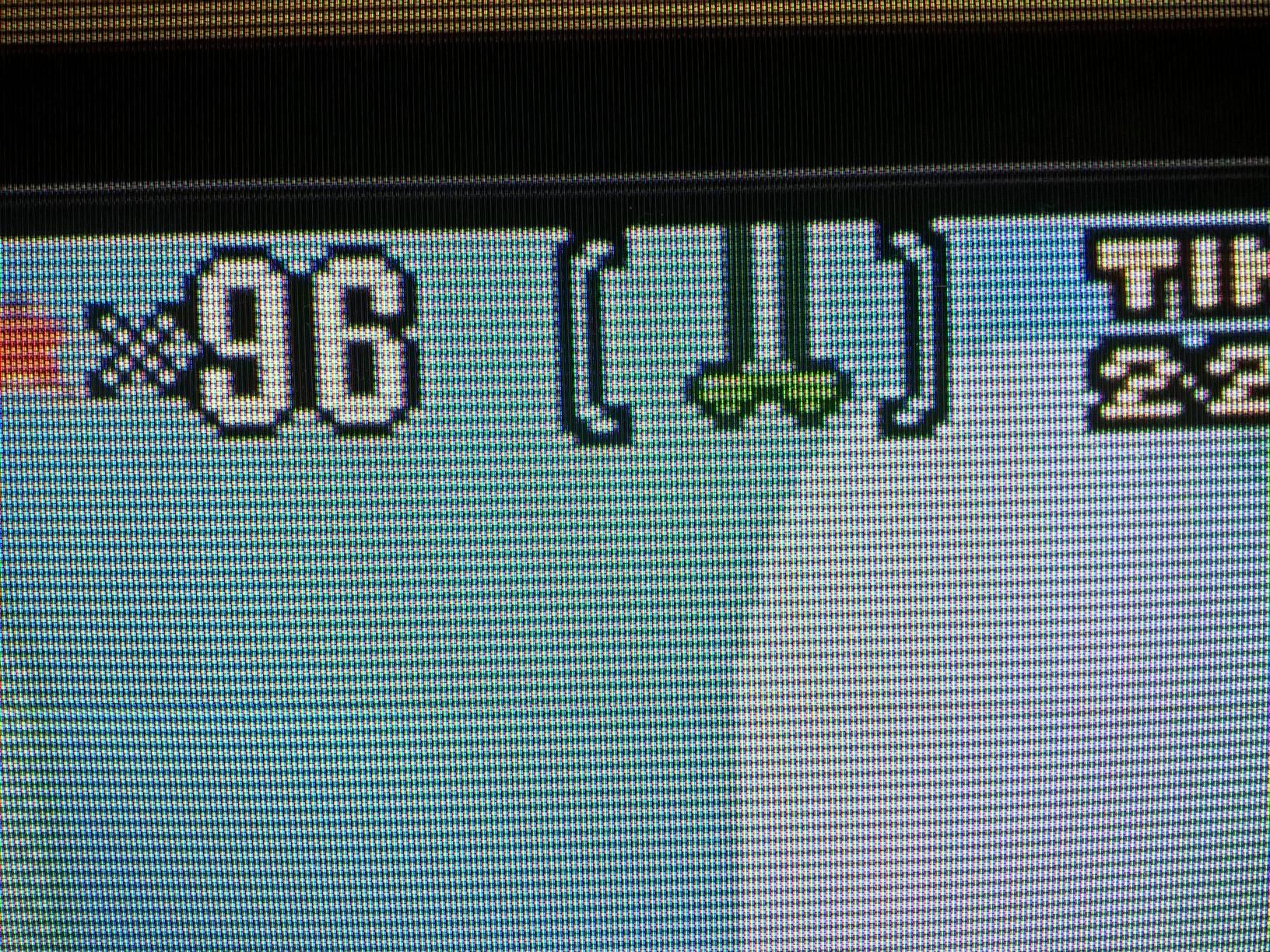 Megaman Zero is another game where it's easy to spot the issue, but it was harder to take pics of it, so I didn't XD. The previous version, from April, didn't have this problem, though. Have you updated the core with the latest mGBA release? I'll try that out later, too (but I still prefer Enhanced mGBA XD).

by Extrems
It is updated with the core from the May 26th development build.

by TheDimensioner
Hm, then I'll test their release, and if it has the same issue, I'll direct the problem on their forum XD.

EDIT: I ended up not testing the main mGBA branch 'cause I got too hooked on Metroid - Zero Mission, that at least had no issues whatsoever XD. But I just confirmed that the latest release of EmGBA (June 3rd 2019) fixed the sprite issues. Thanks!

by Andross89
Even disabling the Super Game Boy function, games are not yet using the border space. In this case, could you enable the border of the Game Boy Color? Some games like Pokemon Trading Card and Link's Awakening DX have this function. Thank you.

by carlosrobayo23
Hello, i'm seeing that @TheDimensioner already found the way to use this emulator with 240p with some tweaks.

Then I modified the meta.xml using your pastebin, but I'm still seeing 480i resolution. Any idea what am I doing wrong?

I really appreciate your help

So, what enables 240p, basically, is the "<arg>--scan-mode=non-interlace</arg>" option. The rest of the options that I had added on that paste.bin post were specific to my TV, because I was seeing some weird artifacts that ended up blurring the image for me. Since it's been so long since I've done modifications to that, I wouldn't know how to explain exactly what each thing does, but the discussions here on this thread and over at "mundowiihack" may explain some things. In any case, I'll attach my latest "meta.xml" for you, so I hope you can get the emulator working in glorious 240p! But keep in mind that your TV type or settings might affect how it displays 240p. I'm using an old CRT, so it has native support, but more modern CRTs might not actually display 240p properly, just like the majority of LCDs, with scaling filters and all that.

Ae YOU seeing 480i, or does YOUR TV assumes the signal is 480i?
My TV just ignores 240p and takes it as 480i, it is very common.
Unless you have a CRT, there's little chance that you can get any benefits playing in 240p.
I personnally use sf modes with GBI, not to see mixed scans on my setup, it may work with mGBA too?

by carlosrobayo23
I found what was the problem. I was trying to launch the emulator from the channel (.wad) that I installed from the mundowiihack zipped file that I downloaded.

by alex90
Is it possible to pick a color palette for original Game Boy games?

by Papy.G
There is a way, when you append a CLI file to GBI to do so, It may work with emGBA as well.

Tested GBA saves portability: Tested with Doom. It works well, but with the Supercard miniSD, the roms can't sit on the same card, since it can't run unmodded GBA roms, and emGBA has a hard time running supercard modded roms.

Tested GB emulation accuracy: Tested with Road Rash. Best than on Nintendo's hardware, the game is playable on anything else than monochrome gameboys at last! Still have to check video settings possibilities to improve display.

I tried to change the color for a GB game during the bootup screen by using the gbc_bios file. However it looked glitched during bootup and A/B + directional pad didn't do anything.
I guess I need to use a CLI file, but I can't find the instruction for this.

by Tanooki16
Hello Extrems, just to say thank you, your version is excellent

by turnerl
Very nice! thank you.

by nickstubbings
Hi, Im running into the same problem that was metioned a while back, when i try to select the Gamecube Controller Profile, and then save, it doesnt change and the setting is back to 3DS Controller.

Im using an SD2SP2 (128gb sandisk) with the latest releases of Swiss and mGBA. I have a Gameboy Player and a BBA attached. GC stuff works fine with the sd2ps2 and so does GB/GBA but i cant get the controller config to stick with the GC controller input in mGBA...

Thanks for spending your time developing something that obviously works for most people, i just need to know what it is that im doing wrong!

by Papy.G
I'm afraid I can be totally off, but it sounds familiar, look in the GBI thread, may it be related to using the GBP original disc and changing the control scheme in it? (Settings are saved in Sram and GBI (emGBA) is using them too, or something like that, if I remember well)

by nickstubbings
Thanks for the suggestion Papy.G, i should have mentioned im using a burnt swiss dvd to boot. I have a GBP disc but i rarely use it (literally 2 or 3 times)

Its such an odd issue im not really sure what to make of it. I will most likely just leave it as it is and come back to it later when im less frustrated.

I guess ill be using GBI then! Do you know if it supports GBA Flash Carts? i would imagine it would but ive just moved house and i cant lay my hands on any of my carts at the moment to try myself...

by Papy.G
Try to change the controller Setup in the GBP software, and see what happens when back to emGBA/GBI.

Is the setup save preference according to what kind of writeable support you have and where it is connected to the console?

Yes, it supports flashcarts, while you may have to push the reset longer than with an original game to get to the cart's GUI without problems. If it still doesn't work, you may even have to eject the whole thing. I'm using my SC mini occasionnally, but since emGBA is far more compatible, it is mainly when I need the link ability (Zelda four Swords).

by alex90
As I am curious what every update brings, is there a changelog?
Noticed a little bit of framerate improvement lately.

by Andross89
From some version, Donkey Kong Land 2 stops working. Is there a link to download previous versions of this emulator?

by Extrems
You should see if it happen in mGBA development builds and if it does, bisect and report there.

Extrems wrote: ↑
Sun Feb 09, 2020 1:54 pm
You should see if it happen in mGBA development builds and if it does, bisect and report there.

I tested the latest 32-bit version and it worked perfectly. Please check your version and the three Donkey Kong Land games.

The game freezes when we try to hold a barrel or take a hit.

I also tested an issue that occurs with savestate. The Windows version does not have this bug. In the first versions, I think about 8 games had the same problem. Only these 4 remain:

Just save at the beginning of the level and load it. The game exhibits strange behavior.

Just save at the beginning of the level with an enemy or any non-static object and load it. The enemy / object will disappear. This can impede progress in certain circumstances.

All games mentioned are American.

And ask again to put "LockAspectRatio" in the options, if possible.

I cannot register with Github. I would need to update my browser or use another one. I don't think it's worth it just for that.

I tested several versions and it seems that after version 20190730 the problem with Donkey Kong Land occurs.

I'll leave the attached file for those who need it.

by Andross89
The new version has the same problems. The first Donkey Kong Land works without problems.

by TheDimensioner
Hey, Extrems, still enjoying this! Just passing by to leave some doubts that have been bugging me for a while.

First, I swear GBA DOOM ran smoothly in some older version of this emulator on the Wii, and also on VBA GX, but now I can't seem to find what version it was... Maybe I just confused it with me playing it on a PC emulator, but I can't remember though. I was wondering about it, because that's one of the only 2 ways of playing DOOM at 240p on the Wii (that I know of), with the other being the SNES port (which runs just like it should, but sadly it crashes when overcloking the Super FX chip for running faster). The better Wii homebrew port of DOOM only supports badly blurried 480i / p.

Secondly, I recently cleaned my Wii SD card and USB stick, and decided to reformat them with a higher allocation size (64KB, which is the max for my devices), and I noticed that, just like it seems to happen with my PlayStation 2, games launch considerably faster. The Donkey Kong Country games on GBA usually had audio stuttering during loading levels (even on older versions), and now the stuttering is gone. I mentioned the PS2, because, formatting drives with bigger allocation sizes for using with it, helped a ton with its atrocious USB 1.1 speed (mostly when launching games), but I didn't think the faster USB 2.0 and SD speeds of the Wii minded something like that, but it seems that it does.

Last thing on my mind: what's "ahb_access" for? It's almost on every meta.xml for Wii homebrew that I have, but I really don't know what it does.

Anyways, thanks for still helping the GC / Wii homebrew development on growing!
All times are UTC
Page 6 of 7