A while ago i started to port jEnesis to C. Just a quick and dirty port, to see how much faster it would run...
As i happend to have a Nintendo DS available at around this time, i wanted to see, how it would perform there.
By now this developed into a project of its own and not much is left of the ported code.
I wrote an integrated assembler cpu core for jEnesisDS, as it is not quite possible to achieve playable framerates with a C core.
I am already quite statisfied with the speed, but still see some room for improvement.

The Nintendo DS is really a nice little platform and its a lot of fun developing for it.
The software renderer of jEnesisDS already works quite well and uses blending/jitter correction for scaling to the DS's screen size.
For speed reasons, it doesnt have all the features of the Java version, like shadow-hilite mode and correct sprite making, but i plan to
include this sometime. 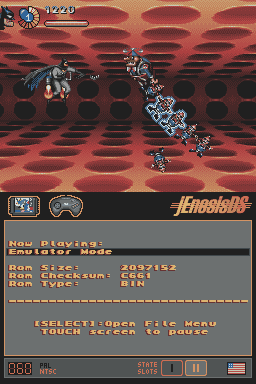