If you've bought a IDE-EXI, I'd like to know how you guys are finding it - is it as good/bad as you expected it?

Personally I I'm happy how they turned out - especially for something that was made by 3 guys half way around the world from each other. Now comes the hard part - support

i was surprised how thick it is

what a nice piece of hardware!
please search before you ask - a lot has been discussed already!
(or use google with "site:gc-forever.com *term*")
http://is.gd/MDmZcr

Hey emu_kidid, are you planning to make some more of those technology materpieces, the matter is that in december thiefes broke into my house and stealed my cube with my SDML, my very rare AR ver. 1.07, SD gecko and some other stuff of my collection, and you know, I am still shocked, but I want to continue
following you in the gc scene and want to buy again a cube, so are you thinking on make a new lot of IDE-EXIS?
Top

you're talking as if they would be sold out

Yeah its very thick and solid. You don't feel like your gunna break it. It fits into the cube perfect and doesn't slide around or fall out. The ide pins would be easy to bend if you pull the cable off at a bad angle. Put your cable on it once and just leave it there. Works awesome with swiss and snes9x. Very happy to have good software to go with the adapter. You can boot the emulators/homebrew (as bootable iso) from your hard drive with swiss. So in a xeno cube you can boot swiss direct from disc and it gives you access to everything else without having to swap out discs. Could get expensive making a new disc for each version of swiss, lookin forward to running it on a viper as a plug it. Well worth the money, surprised you haven't sold out.
Top

received mine yesterday, waiting for the hdd to test it.

Can't wait for it
Top

Can't complain just wish it had a case so you didn't have to guide it into the port.
Top

kevstah2004 wrote:Can't complain just wish it had a case so you didn't have to guide it into the port.

I'm planning my own case-mod for this. When I have it ready to be build, i create a work log here.
Imagine a gameboy player, inside it a hdd, ide-exi and usb bridge. then some wiring to an old memory card, a power connector, a switch and you get a portable HDD solution, that can be screwed at your gamecube's bottom.

Can't play gameboy games with this setup anymore, but i think vba-gx on the hdd would fit.
ct_the_1 (currently very busy and rarely online)

ct_the_1 wrote:I'm planning my own case-mod for this. When I have it ready to be build, i create a work log here.
Imagine a gameboy player, inside it a hdd, ide-exi and usb bridge. then some wiring to an old memory card, a power connector, a switch and you get a portable HDD solution, that can be screwed at your gamecube's bottom.

Can't play gameboy games with this setup anymore, but i think vba-gx on the hdd would fit.

Wow, that sounds pretty awesome. I look forward to seeing that. It woulda been nice to have a case or something, but I won't complain.

I'm just going to get a cheap knock off memory card on DealExtreme and a small black box to fit the IDE-EXI in and just solder some wires between em.
Top

CYatta wrote:I'm just going to get a cheap knock off memory card on DealExtreme and a small black box to fit the IDE-EXI in and just solder some wires between em.

This idea started my project 2 days ago.

I have yet to get the thing to work or be read by any Gamecube program.

So far I'm disappointed that this device does not work.
Top

I think your hdd is not supported (maybe too old). Please try another hdd with your ide-exi.
ct_the_1 (currently very busy and rarely online)

Unfortunately, the only other available hard drives I have are even older.

I assume there's no way to quickly implement support for older hard drives easily? (I was reading through some other topics and read doing so wasn't in the immediate plans for Swiss) I, again, don't have access to a newer drive or anything like that.

I guess I'll just have to let the thing sit around for quite awhile.

You formatted it to FAT32 with diskmgmt.msc? how do you have it connected? supply pic, the red line of ide cable should point towards the GC. Set it to Master also.
5 (Ultra ATA/100) drives should be no problem.

Run devmgmt.msc in windows click on IDE ATA/ATAPI controllers then right click on the channel it's connected to, Advanced Settings and it'll tell you the maximum transfer mode of the HDD.

http://www.filehippo.com/download_speccy could be used also

Hey, it works! I think it was because I didn't have it set on master (didn't have any jumpers on it at all). Thanks for the advice!

Now to go play some games off of it.

Be sure to add them to the compat list.
Top

Alright, I've tried to boot games off of it, but none of them seem to work at all. Do GCMs need to be their original size? I've shrunk them all (and they boot up and play fine in Dolphin).

Swiss (r33) has problems checking everything before a game would boot up. I have all of them on my hard drive, and all were shrunk using GCMUtility. If I do try and boot a game, I get an error screen. I've tried patching games using that pre-patcher utitlty, but that didn't help. Also, I frequently get the error of "Invaild DOL" whenever I try a boot a DOL file off of my hard drive (ex: MPlayer for IDE-EXI) or "DOL is too big" for the same version of Swiss.

What am I doing wrong?... (I don't know if this is a Swiss issue or a hard drive issue, since I've tried different versions of Swiss and got the same results)
Top

Oh, I've shrunk about 30 games with GCMutility and they all work great. So it could be the harddrive, I had issues at first too (instant error on all when checking, not booting, etc) but then I tried another drive and now everything is perfect.
.
Top

I prefer to shrink with gcm just me? it's more compatible.

prepatch your images if needed first then shrink, but wait until the preparcher is fixed it's being overhauled atm.
Top

I can't test it beucase I have my usb-ide bad, when I have other, I will test it and say:)

I tested both adaptader yesterday, the chip work and look welll but will be necesary a protection.
You don't put that, and this was a fail

I only test one game (Ncaa Basketball 2k3) and don't work. I wait that the swiss load the most games :/
Top

are you saying that you bought two IDE-EXIs and they both don't work or did you build one yourself?
please search before you ask - a lot has been discussed already!
(or use google with "site:gc-forever.com *term*")
http://is.gd/MDmZcr

That or the poster has an SD adapter as well.
Top

So far I have used Swiss r33 to browse and launch from IDE HDD,
Gamecube game image files have succesfully booted either in Swiss or unofficial SD Boot for HDD,
I have failed to find a compatible SD Load for IDE (Currently sdload-slota-slotb.dol), am I missing this or does it not exist? (please link)

In turn haven't been able to get Mplayer for IDE working, except for once, the very first time i tried it actually loaded the mplayer.dol from HDD in Swiss. But has failed at 98% every try since.

I am thrilled that my adapter actually works.
Many thanks and much love to you all for sharing this knowledge and software

Edit: Found that Mplayer.dol was corrupted and had to use a program to delete it from the HDD and copy a fresh one back on, now Mplayer loads from HDD via Swiss. Awesome

Tried: Some .isos (not pre-patched), some worked, some not, audio in movie sequences is well...screwed to some degree (dunno if there's a fix for that)
Need to try out: .isos(pre-patched), .dols, homebrew etc.

The only downside of the EXI is that the Ide-Cables are a bit of a pain to disconnect / unplug. (Afraid of tearing connectors off

Other than that: I love the IDE-Exi, because HDD loading is awesome, because It saved me a whole lot of money (Somehow some GC games are going for 40+ bucks on ebay) and because I don't have to swap discs anymore (yeah, I'm lazy as hell

Thanks to everyone who contributed to this awesome device and software!!!!


EDIT: Aw man, I finally did it, I tried to unplug the IDE-Connector and look what I've created... 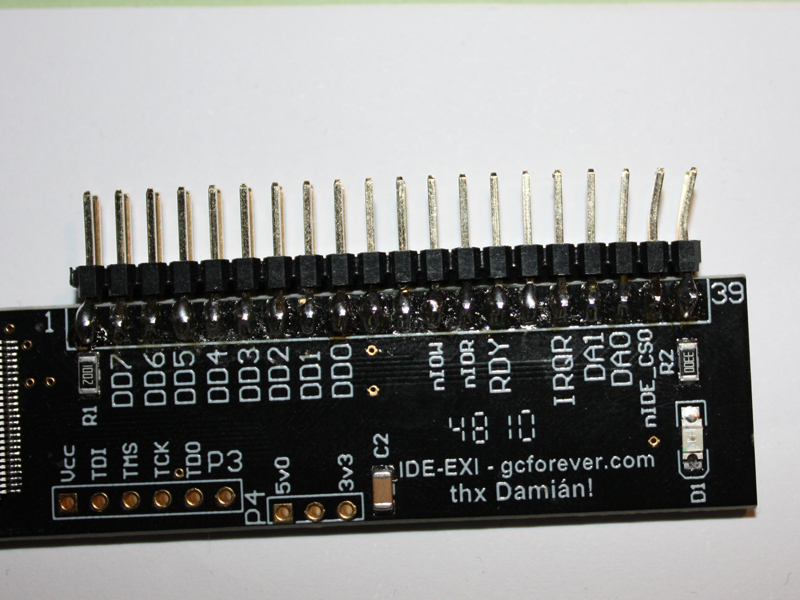