Little problem, can't get any game to boot with the newest ones.

These games all work (except SADX Prototype) with r174. Maybe it's something wrong I'm doing? I think that the reason that the SADX Prototype won't work is because the ID is RELSAB, forcing NTSC doesn't work with me either.
Last edited by 47iscool on Mon Nov 25, 2013 10:38 pm, edited 2 times in total.
Stormcloak Soldier
Top

I don't support Swiss running on a Wii so I can't really fully diagnose the issues you might be having. I'd try clean ISO files on a freshly formatted card then let me know.

R174 patched the iso
How do iso's that have been previously patched with those older versions of swiss perform against the latest swiss patching methods??

Nothing, tried Super Mario Sunshine GMSE01 (cleanrip MD5 checks out with the one at redump.org), access to card is now slower than before, tried on both a GameCube and Wii Console. I'm thinking it's my 8GB that swiss doesn't like. Not booting games with my 2GB either.


megalomaniac wrote:R174 patched the iso
How do iso's that have been previously patched with those older versions of swiss perform against the latest swiss patching methods??

just a heads up:
there has been a slight change to the menu device slot selection
swiss currently defaults to slot A for the selected device
if you wish to browse slot B or change speed settings make sure to press the X button 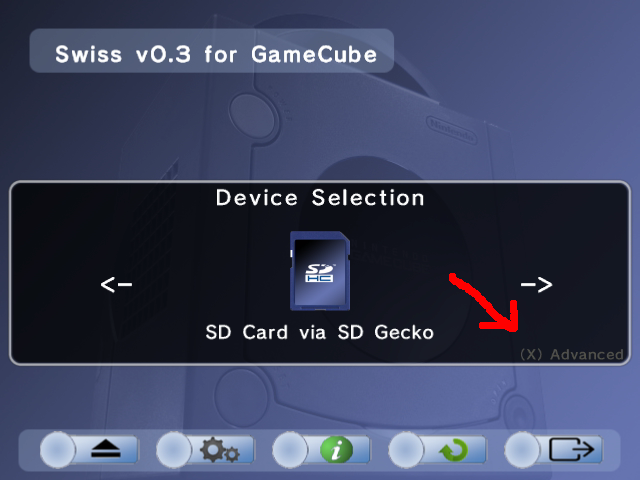 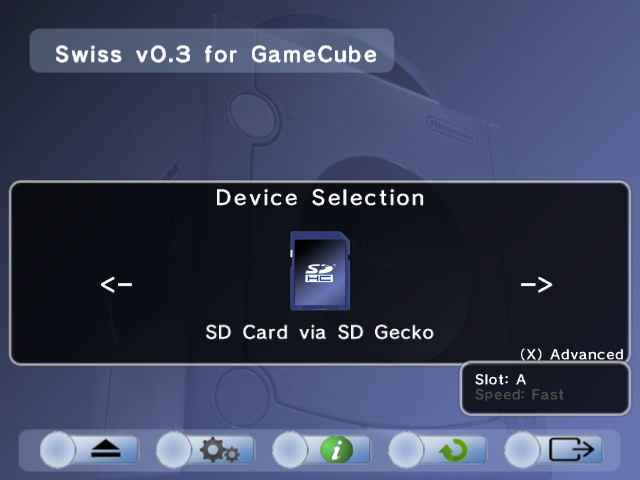 Hehe I missed that until emu_kidid pointed it out to me

megalomaniac wrote:just a heads up:
there has been a slight change to the menu device slot selection
swiss currently defaults to slot A for the selected device
if you wish to browse slot B or change speed settings make sure to press the X button

Thanks for showing me this, two complaints though

Swiss.ini will not be accessed if the SD Gecko is in slot B when loading from the WKF, this means that when I load Wind Waker from my WKF I have to chose all my video options again from scratch.

The other problem is that having the Gecko in slot A will cause a tantrum with most games because is doesn't have a memory card there, with some games not allowing slot B saves at all (I know memory card emulating is a thing, but from what i understand it still isn't reliable)

I feel that setting slot B as the default will fix this quite easily.
Top

r250 is up with device info in the file browser added.

I will default slot B for SD Gecko shortly and hopefully some other misc changes.

r253 should be up soon with Slot B default and improved read code.

Nice! I'll have to give the new build a try this weekend
Top

R248: BLACK SCREEN
R249, 250, 251, 253: The sound during the initial FMV animation is choppy like it was with earlier Swiss versions.
Sound during menu transitions is choppy as well.

EDIT: Found a possible config save bug.
Put the .iso file(s) in a subdirectory (e.g. GCGAMES)
Before loading a game, edit its configuration
From page 3/3, go back to page 1/3
Next, Next, save and exit (or change something on page 3/3 and save/exit)

I'll look into the save bug.. as for the choppy audio, I'm working on it

It is worth noting that with the new Swiss releases the audio for the introductory FMV in Super Smash Bros. Melee US NTSC's plays smoothly.
Too bad audio ends way earlier than the video.

Sorry if it is a silly question, but I have to ask: about Mario Kart, why SD-Boot works better than Swiss?
With SD-Boot the FMV plays smoother no "flickering"/repeated frames, plus the audio stuttering fix works.

With Swiss R094, R174 and R189 the video during FMV seems like it goes back by one frame from time to time and enabling the audio stuttering fix (on R174) makes the game unbootable.
Gamecube DOL-001 (EUR)
Viper GC Extreme + Cobra 2.1
SD Card Adapter
Top

This is the first of three posts were I am going to detail how Swiss R253 behaves with a bunch of games I have.

If you have a request for a specific title, let me know and I will test it for you if I have a disc to take a clean rip from.

All games are Version 1.0 and "redump.org compliant" clean rips unless specified otherwise.
All isos have ben defragmented (using contig) as I have notices some games would not start otherwise (and swiss sometimes could not detect the fragmentation).

No audio streaming (as expected).

007 Agent Under Fire V1.01 NTSC/US (REGRESSION: NOW BROKEN)
R253: Green screen at boot.
R174: Works, with some stuttering during FMVs. FMVs look like if they are rendered at half resolution, are badly deinterlaced or badly scaled.
R094: Same as R174 but has slower audio during FMVs (R094 also patches a lot more files).

Baten Kaitos - Eternal Wings... (REGRESSION:NOW BROKEN)
R253:
- Lots of garbage on scree after loading the main .dol
- FMV stutters, video is not in sync (I have also tried "fstfix t s" but it did not help).
- Disc 1 is incorrectly recognised as "Disc 2".

R094: WORKS
- Green screen + some garbage shows for half a second after loading the main .dol
- FMV has a constant stuttering sound and black horizontal banding moving vertically
- Disc 1 correctly recognised as Disc 1

Batman Begins NTSC/US (IMPROVEMENT)
R253: Sometimes it hangs with a black Screen after level 1 (save between missions just in case).
R174: Seems to load faster, but lacks some of the audio and buzzes while loading.

Bomberman Generation NTSC/US (IMPROVEMENT (be sure to defrag the iso) )
R253: Works fine, with just some stuttering during when the Hudson logo appears.
R174: BROKEN.

- Without a disk: asks for the game disk
- With a disk, regardless of "Use a DVD disk for higher compatibility?" and "Stop DVD motor" combinations: "An error has occurred".

R094: Works, with some hissing when it loads.

Home Run King NTSC/US (PARTIAL IMPROVEMENT)
This seems to be a difficult game as it loads constantly.

R253:
- It takes up to 20 seconda to go past the initial MLB white screen.
- During the initial FMV the video freezes every couple of seconds, while the audio keeps playing smoothly.
- The video "between freezes" gets skipped- During the game, you can experience several slowdowns in animations as the game loads.

R174:
- It takes less time to reach the initial FMV.
- The video during the initial FMV stops every second but plays fully without skipping.
- Slowdowns happens during the game as well.
- The game buzzes like hell pretty much everywhere (FMV, menus, game...).

If you've pre-patched a ISO using an older version of Swiss, I don't detect it using the new version, so I would always just use clean ISO files.

nope, the patches keep undergoing large changes, but that should be over now.

With Tales I guess I should mention it takes just a little bit longer for the map to load after fights, results in a black screen delay. But the annoying sound problems are gone.

What could be the problem with Baten Kaitos not detecting Disc 1 properly, shows up as Disc 2?
Top

All games are Version 1.0 and redump.org "compliant" unless specified otherwise.

Works with R094 and SD-Boot 0.4 (with severe audio buzzing). May hang while changing rooms.

R253:
- At the title screen, the music stutters for a moment and then it resumes playing
- During the attract screen animation and during the game the music is missing
- After the attract screen animation played once, pressing start will result in a black screen if not done at the right time.
- Sometimes after pressing start at the title screen, some green "garbage" will show on the bottom of the screen for a split second
- The Pikmin movie (accessible from the option menu) exits back to the option screen after the Nintendo logo.

R174/R189: Music works properly. It has the same timing/freeze problem when pressing "Start".

Note that with SD-Boot 0.4 both the FMV animation and sound are smooth.

Mortal Kombat - Deadly Alliance NTSC/US (IMPROVEMENT)
R253: No more audio buzzing. No problems with interlacing.
R174: Buzzes during the initial FMV. The FMV itself has interlacing problems (like if only half of the lines are rendered on screen)