Yes it can read dvd-r/etc with NO modchip what-so-ever and it can boot it too.

O.o ?!!!!
SO I can use burned GC Game Backups WITHOUT Modchip shit?
THATS GREAT!!
never expectet that, cause Wii don't even with Homebrew on.......
http://ultrasn0w.1x.net/
Top

the wii will read backups with homebrew more is needed though, you need a special cmios or the gamecube backup channel
Top

plus that stops working after a certain Wii drive revision and requires cIOS as you said.

On the Gamecube there is a software method to unlock so there's no issues.

emu_kidid wrote:Nukatha, I haven't used PSOload since maybe about 2006 or so, I was using it for a few years before so I know how picky it can be..

Swiss and Cube64 use the same dollz tool from softdev but there is a difference which I think is the issue.. Swiss is compiled at 0x81300000 and Cube64 is at 0x80003100. When compressed with the tool, the behaviour is that Swiss compressed will have an entry point of 0x80003100 and Cube64 will have something higher 0x80300000. Next version of Swiss I compile (shouldn't be more than a few days away), I'll provide an uncompressed version too since compressing it doesn't satisfy certain loaders.


So,can we assume that Swiss's next release is imminent?That's a wonderfull surprise!
Emu_kidid,can you bother to tell us what changes you have implemented in please?
-Can we hope for the config file system?
-And for all the PAL users,have you found the solution to the 576i signal when the Wii is in 480p mode?

Of course,there is always Luigi's Mansion problem and Wind Waker's dungeon map bug.Any news on these?

I am waiting breathless!!!

config file system and a few other features

Great!I wonder for ' the few other feaures' already!

Saw an update on the source page yesterday?

I'm still waiting on my SD card reader from dealextreme, so no fun stuff for me yet, (if anyone has any experience with ship times to the USA, that would be nice).
Top

I get stuff from dealextreme within 2 weeks but I'm a little bit closer (Asia->Australia).

it took 3 weeks plus a day or two to get my order to north idaho.

emu_kidid wrote:I get stuff from dealextreme within 2 weeks but I'm a little bit closer (Asia->Australia).

to west coast, about 2 to 3 weeks,... (i've had a PSP charge cable take over 8 weeks, but i ordered it and it was on back order the next day or something)
Top

Just got my SD card reader.
Cube64 works okay, at just over half speed for Smash Bros, and close to normal speed for Mario64. How did nintendo get Ocarina and Majora's mask to run so smoothly?

Anyways, I also can't get SDload to boot through psoload yet.

It's a wonder to us as well how they got Majoras Mask full speed on a Gamecube.. but then again they do know both hardware platforms way better than us and their emulator only runs for a single ROM with no menu/etc so it can be stripped down.

As for SDload to boot through PSOLoad, try running it through dollz first (dol compressor). If all else fails, wait a bit longer (sorry about this) so I can compile a non-compressed version.

No reason to be sorry, this is a hobby, not a career (I hope), take your time.
Top

I'm probably doing something wrong here, but the few computers that I've tried to run dollz on to compress swiss got to 99.01% and crashed every time on every setting.
Anyone have any ideas (or have a compressed version?)
Top

dollz is trying to compress a already compressed dol that's probably why? new version is coming up shortly which will feature compressed and uncompressed, or I'll rebuild r62 for you uncompressed - just had too much on my mind to remember to get it done

Oh... That makes sense... compressing something that's already compressed. Derp. I really need to start learning how some programming works. I feel useless.
I hope I don't sound like an annoying voice encouraging you to neglect your life outside of the Internet for the sole purpose of allowing one person to use a program that you built in your spare time.
Top

no worries, real life > interwebz for us. whenever we need a break, we just disappear

can i use swiss on an unmodded gamecube?
Top

well you need some way to boot homebrew on your cube...but there's stuff like SDLoad + Action Replay or Datel Media Launcher that can do that on unmodded GCs
please search before you ask - a lot has been discussed already!
(or use google with "site:gc-forever.com *term*")
http://is.gd/MDmZcr

Some small progress on the GUI front to help with the file manager side of things to come. I have it mostly working but not for certain special file types like memcard raw dumps and .GCI files. Also adding in some BBA support. 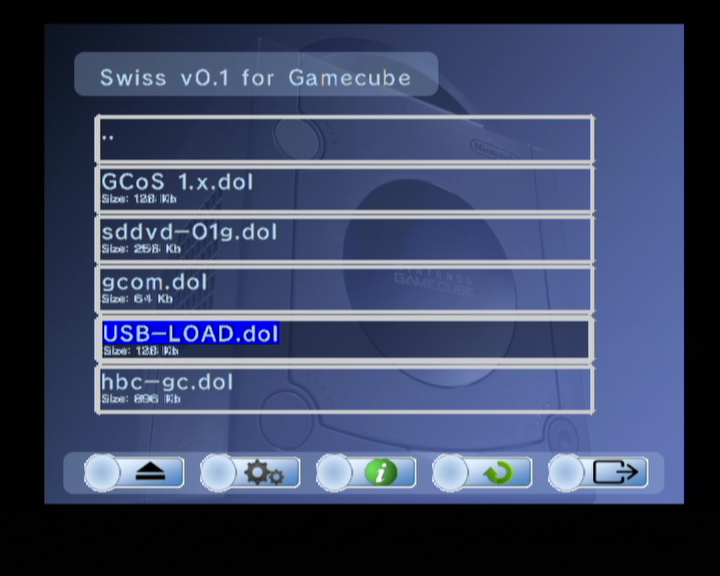 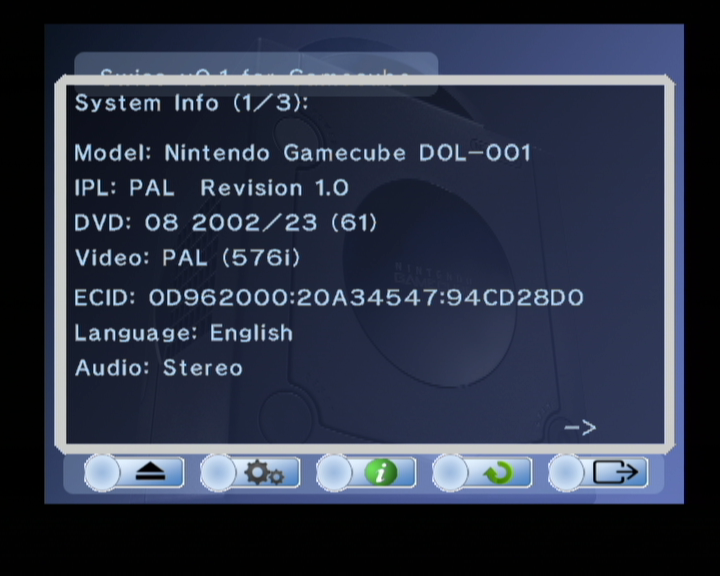 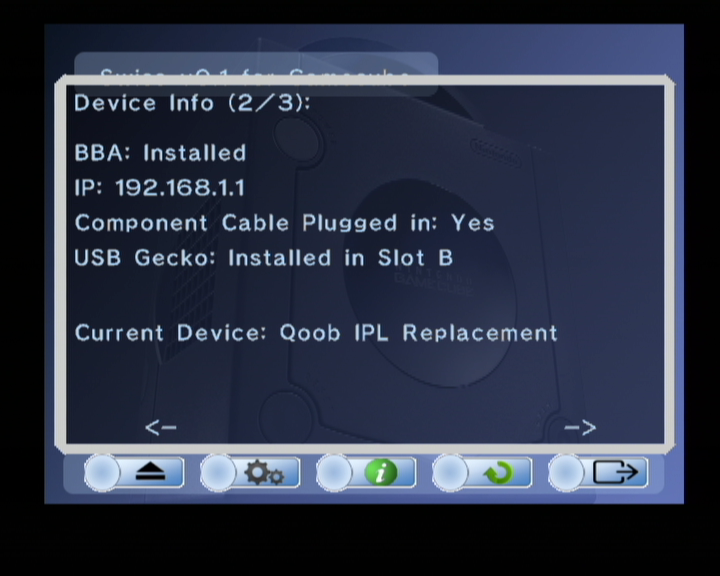