man i really have to lurk on modretro and benheck a lot more than i do 8)
please search before you ask - a lot has been discussed already!
(or use google with "site:gc-forever.com *term*")
http://is.gd/MDmZcr

Ashen wrote:marshallh wrote:
small update, I did a board respin some time ago

Cool. I was hoping he would add that at some point.
tbh, I hadn't checked in on benheck in ages.

I'll get in touch with Marshall, I'm sure he could add GC support.

Just a "quick" chime-in to say that the basic GC Digital AV code is working on the FPGA.

No HDMI output yet, as it needs to be modified to work with the GC's interlaced output.
I'm just sorting out a modchip for this PAL GC too, so I can use progressive mode via HDMI.

Basically it's running from the Digital AV output via the FPGA then out to VGA on my dev board.
(It's using some sigma-delta DAC code for the VGA testing, so it's a bit fuzzy atm, understandably).

It is also outputting YPrPb (component style) colour, but my old Pioneer plasma can switch to component colour space so I can see it properly.
The Pioneer also supports interlaced via the VGA socket, which is a bit hit-and-miss these days. lol

It will need a YCrCb to RGB code block for proper RGB / VGA output, but the image is perfectly stable (apart from the above mentioned fuzzy stuff).

So, we now know the Digital Vid interface isn't so mysterious after all.

Sorry, no photos just yet, need some sleep first (it's 5am here now), but here's the first SigTap capture...
http://i40.tinypic.com/2ynq63q.jpg

btw, on the gamesx pinout, the "ClkSelect" signal is actually called "vphase" or "VICR" in the GC patent.

As described in the patent / gamesx; when the "Y" byte equals 0x00 (right after "vphase" toggles), the Cr / Cb bytes then denote the "flag" bytes.
You can then extract the various sync / flag bits...

The 54MHz and 27MHz clock outputs from the GC are normally free-running, so it's the just actual pixel rate which changes to 54MHz for prog mode (dependant on the software, as mega dude reminded me.).

The above captures were with interlaced mode ofc, so this is a 27MHz pixel rate (that "DVI_PLL" signal is 27MHz).

EDIT: Technically, the "pixel" rate in interlaced mode is only 13.5MHz as you'd expect, 'cos there's only one "Y" (luminance) byte for every two 27MHz clocks.
Each of the colour difference signals is only half the sampling rate (6.25MHz) of the luminance . This is a VERY common SD video sampling standard.

Early days yet, but thought I'd leave an update if anyone's interested?
Can't promise a that finished product will definitely, but I'm hoping this will at least lead to something nice.

(Might work on non-Dig AV GC's as well, but soldering to the DAC won't be easy.)

hehe..thought you were going to sleep already

megalomaniac wrote:hehe..thought you were going to sleep already

Me too, but you know what it's like. lol

Thought I was gonna settle down to watch yet another Mythbusters,
but had to settle for "Destroyed In Seconds", or that boring American Chopper junk. *ducksforcover*

Did I mention I'll be trying a laptop panel at some point.

EDIT: Re-posted in the new thread, so as not to hijack this one.

i only have a few MEGA3 PCB's left...but i still have more chips so i can make some homemade PCBs...i cant get a small production run on the few chips i have remaining...


there will also be a few changes to make installation a lot more user friendly for almost anyone....
no details yet...im still working out the specifics....

Hi megalomaniac! Too bad I found out about your mod only today as I would order one of those PCBs. I hope you're still working on this thing because it's amazing. Now if only somebody could reverse engineer the MX chip and make a cheaper equivalent... I hate when people charge for an official component cable over 300 dollars. It's insane. That's why I think your work is so important. I hope you will make more in the future. Good luck!
Top

I'm sure making a fpga solution is doable I have no idea how difficult it is I've never tried this sort of thing. A modder (furrtek) recently found a way to convert the digital video signals of the virtualboy into something your tv will accept:

Is there an Instructional guide or images for an Internal mod? Or more importantly is an internal mod possible? I really do not want to compromise my component cable. Im thinking along the lines of installing a port next to the digital A/V like so 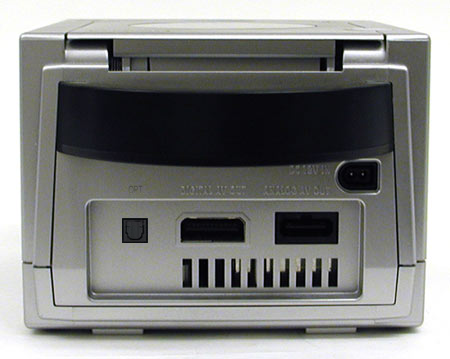 megalomaniac wrote:here is the fiber optic board..
this will be the stand alone board for anyone who wants to add internal fiber optic audio only..(no video)


im my opinion, it may be easier to add this board to the GC with only 5wire connections to the mobo rather than disassemble the component video cable...
i have disassembled 3 component cables already and the metal shielding must be bent to remove and access the video board.
then 5wires must be connected to the video board...on top of this, the tricky part is to bend the metal shielding back into the original shape (or close enough to original shape) in order to properly close the plastic housing...
although this may or may not be a simple task, i dont have the patients to mess with the shielding long enough...
i dont have pics of the metal shielding readily available but im sure you all know what im referring to...

some notes about the internal audio only board:
the internal design uses stacked components to save board space and make the design as small as possible...
i needed to minimize the footprint of the audio board to allow me to use it on the video board also...
...so this design is used for both internal audio boards only and full audio/video boards too...(with small differences in circuit pathways, but same footprint)

...and here is finished product
TC9231N
47uF capacitor
and super glue on the jumper wires just in case

Any pics of it installed in the GC?
Top

I'm assuming you will build some kind of enclosure for all of this? or will it fit in the GC?
Last edited by ChristianMswanson on Tue Aug 06, 2013 6:08 am, edited 1 time in total.
Top

megalomaniac wrote:i assume you are talking about an audio mod....
viewtopic.php?f=26&t=1236


ahh yes..sorry i just now read this.. this is what i was looking for
Top

Will you ever rebuild new Mega3 boards?
Top

Is megalomanic still making things that achieve this?
If so, what's the process of buying it?
Top

It´s mainly for the N64, but marshallh also added a jumper and the extra signals for the possibility of GC support.
You can follow the project here:
http://forums.benheck.com/viewtopic.php ... 67#p487067
Top

I think the Wii U is incapable of reading GC discs (I do not own one however, so I am not sure), however if so they cannot be ripped.
Thanks,
~ AwesomeMarioFan
Top

UUUaaaahh it's been too long since I've been active.

Anyone looked at this yet? Might be worth investigating... http://www.alibaba.com/product-gs/80784 ... V_DOL.html

it only takes 5 minutes to ask when they are online...
but you will see there is no stock


and if you read somewhere in these 40+ pages, i contacted 100 or more sites and listings already...

I'm only a novice-to-average solder monkey, so excuse me if I'm asking something stupid. What I'm wondering is this:

We KNOW the pinout of the MXB012355 chip, right? Why don't you build an adapter for an IC programmer that can read it, dump the HEX data, and then burn it to a more easily found chip? Yes, you'd need to revise your board for different data lines (probably), but that would certainly be easier to deal with in the long run, rather than relying on hard-to-find preprogrammed ICs.
Top
Locked
536 posts