I am opening a new thread for the second release of wii-linux-ngx:

The release kernel is compiled from stable-v3.x

To boot the kernel just enter BootMii and select the bootmii/zImage.ngx file from the SD

For reference, everything is explained in the README.

How can I help?

Help is needed in these areas: https://github.com/neagix/wii-linux-ngx/issues

I am trying to add support for RGBA framebuffer mode, I have finished the driver work but getting a panic.

The defconfig has been updated too in case you want to make some troubleshooting.
Top

-= is not a postfix operator, this will not process the first two pixels per line.
Top

-= is not a postfix operator, this will not process the first two pixels per line.

Edit: You're right, that needs to be fixed. However I cannot get to debug that code until the panic reason is found..
Top

this is great, thank you so much for your work! unfortunately i don't have a wii

Do you plan to continue working on this project? I see that the pre-compiled kernel doesn't support module loading, but my attempts to build a new zImage/kernel has failed. However, I'm not experienced at building kernels, so it's likely I messed something up. Let me know if it's even possible, because I think it's cool being able to run a Linux environment on something as strange as a Wii (also, I've been turning it into a Discord bot server

). Thanks, and keep up the good work!

Hey, is this thread still active? I'm planning to run a small home/light-gaming linux server on either wii or gamecube (if that's ever feasible).
Can you do so with the current state of the project? If not, is the project still ongoing?
Can anybody help me on the matter?
@TheLegen27 you seem to have something up and running, aren't you?
Fun fact : The coolest game to use the gbalink capabilites with the GC is a small extra game for Rayman 3 on the Cube. But it rocks.
Top

Yes, I got something running

I managed to run a java server from the wii, but the only problem is, I can't seem to keep it online with ethernet. Wifi works for a while, but randomly decides not to renew its IP address (that's probably an easy fix, but I'd rather use ethernet for a server).
I'm not sure how well any gaming server would run on a wii (the wii's specs are pretty weak), but regardless I'll help because I don't have anything better to do

It's fairly simple to set up. You'll probably want to use gparted from a pre-existing linux system in order to format the sd card.
Make sure you've already hacked your wii (here's a guide if you still need it https://www.lifewire.com/how-to-install ... el-2498513 ).
Then, get your SD card. I'm pretty sure 32GB is the max, and something like 2GB will not be enough. create a FAT32 partition (maybe like 1 or 2 GB) and EXT3/EXT4 partition on an SD card (use the rest of the card, except leave around 2GB at the end). The remaining space can be a linux-swap partition. Make sure the partitions appear in that order.
Then, you can go to neagix's release page ( https://github.com/neagix/wii-linux-ngx/releases/ ) and download "bootmii.tar.gz" and "rootfs.tar.xz".
Extract bootmii.tag.gz into the FAT32 partition, and rootfs.tar.xz to the EXT3/EXT4 partition.
All you have to do after that is plug it in and boot it up. Open the Wiibrew channel, open the menu, and launch bootmii. Linux will begin in moments.

The configuration part is a bit more complicated, and you'll probably have to do your own research to figure out how to do certain things. However, make sure to use the wifi config tool in your home directory. It might fail, but ignore that: it configures the wifi adapter wrong. If it fails, just type "nano /etc/network/interfaces" and change "wlan0" to "wlan1". Not sure why the wii names the device wlan1, but oh well.
You should also set up the swap partition, as 80MB of RAM will often not be enough to run / install things. Just type "nano /etc/fstab" and replace the line where swap partition goes with
"/dev/mmcblk0p3 swap swap default 0 0"
Then restart and start doing whatever ya want

I finally got around to trying this on a Wii - works pretty well. I'd love to see proper video hardware support one day though.

I set it up with gumboot + Priiloader on a later revision Wii, Wifi + USB keyboard + extra swap on SD + backup swap on USB. It even ran openjdk 7 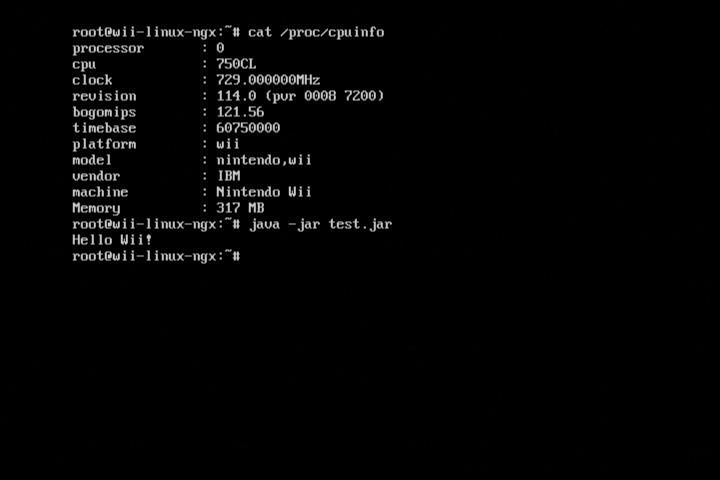 I am opening a new thread for the second release of wii-linux-ngx:

The release kernel is compiled from stable-v3.x

To boot the kernel just enter BootMii and select the bootmii/zImage.ngx file from the SD

For reference, everything is explained in the README.

How can I help?

Help is needed in these areas: https://github.com/neagix/wii-linux-ngx/issues

If you give it a try please report your findings, thanks!

Every time I compile a new kernel (I did it with a lot of different ways) and I try to boot it with bootmii it flashes a green screen and gets stuck there, Any ideas on how to fix this?
Top
Post Reply
13 posts • Page 1 of 1