I got my gamecube back from my little bros and they said it wasn't working. They had it for 5 years and it stopped working for a year already. One of my little brother said that one of my nephew while playing the gamecube, he decided to change the game, but while the gamecube was still on and the game disc still rotating. My nephew grabbed the game disc in the gamecube, and the TV just went black. Then when I decided to go over there, I brought it to my house and when i plugged all the cables in i could hear the gamecube being turned on but can't see the images. I ordered a new A/V cable, plugged it in and the visual and audio came on, but when I put a game disc in the gamecube, it can't be read. I cleaned the lens multiple times and some times the disc could be read but most of the times the disc can't be read. I then decided to do a pot tweak. Finally did the pot tweak and tested it multiple times and out of 6 games, 2 of the games doesn't go to the point where i can't even play. After the intro to the game is done, the cube gives me an error that said disc can't be read. On the other 4 games, some parts i could play but can't play long because the disc will end up saying it can't be read. For example, i tried super smash bros melee. Some parts work. The versus mode i haven't had a problem yet, but on the one player, classic mode, it'll go to an extent then give me a disc can't read error. Also, my multimeter couldn't pick up the resistance when i pot tweaked it. Yes, i did put my probes in the correct placement of that small black box with a screw part in it. One probe on the left side and one probe on the bottom corner of the right side and i also test to make sure my multimeter wasn't faulty. When i couldn't pick up the resistance, i started turning my screw counter-clock wise and clock-wise, then i was testing the game disc. I'll go back and forth until i find the right range where the games could be read at its best and kept it. Even then, the cube will give me disc error at some point in the game. Is it possible that the laser needs replacement? That's my only conclusion left.
Top

Can't rule out the possibility of needing a replacement laser but if you cannot read the potentiometer it is possible something got spilled or fell into the drive. I would pull the PCB and check the other side before ordering a new laser.
Top

Sounds to me like you're not measuring the resistance value from the right spots. 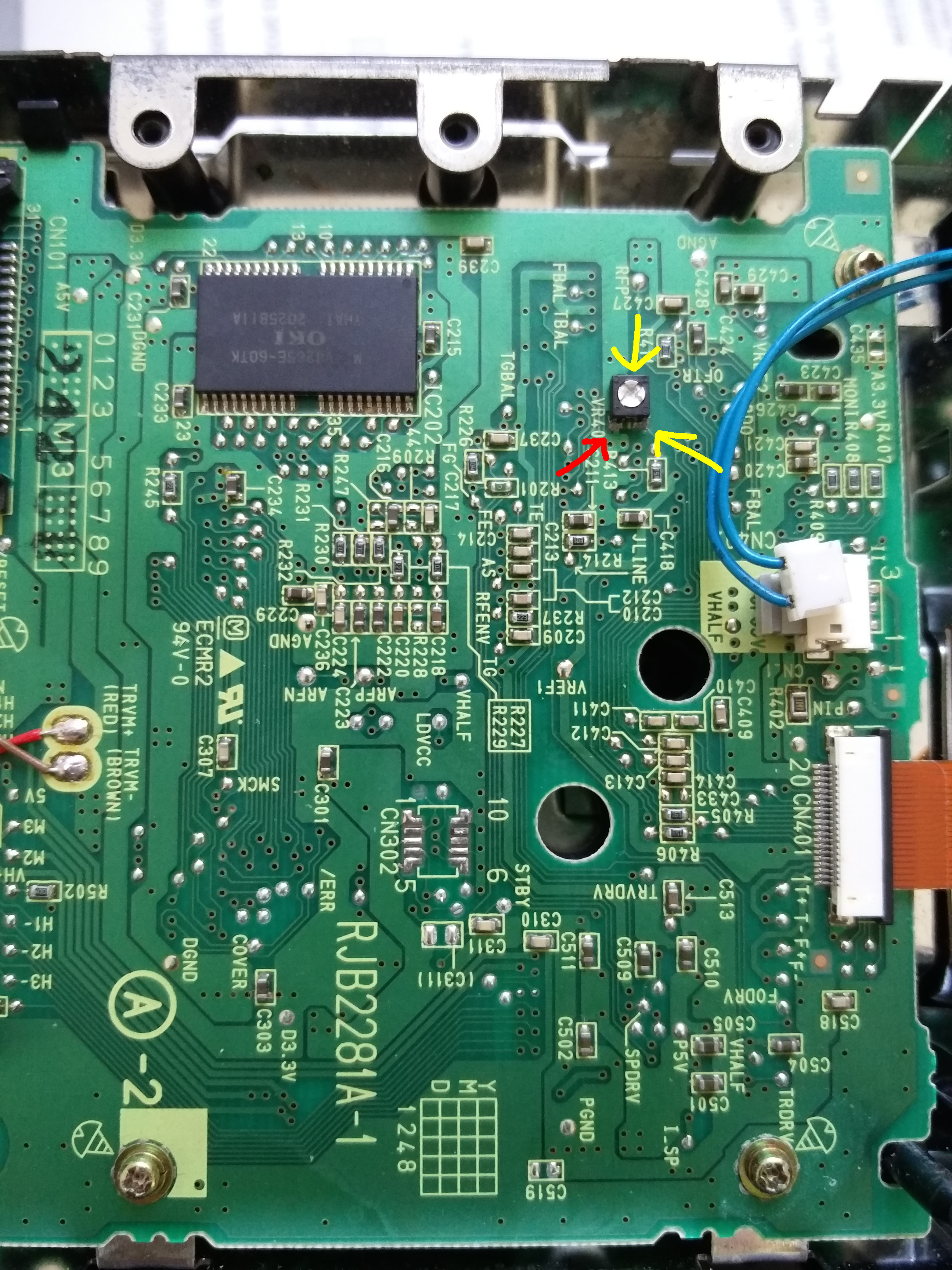 Your multimeter probes should be placed on the pin with the red arrow, and one of the pins with yellow arrows (there's continuity between these two).

If you still can't find the right spot, it's time for a laser replacement.
Top

I did take the whole gamecube apart and inspect it over again and again. No spills were made. I also cleaned the cube before i put it back together. Yes i did put my multimeter probes in those areas. I even switched the probes around to test the spots just in case, but same results. Sometimes ill get numbers but the numbers go crazy. Like 0.XX to 20 then quickly drop back to 0. The most ive seen is in the 50's but itll quickly drop to 0. The numbers werent stable at all. The end result is itll always go to 0 and stay at 0. Thats when i just went to adjusting it back and forth little by little and testing it.

Also, is it weird for the laser to be banging against the rotating part where you put your disc on? When i start my gamecube i realize the laser will bang against it twice like it wants to move foward more, then move back and starts reading the disc.
Top
Post Reply
4 posts • Page 1 of 1