ViperGC & ViperGC Extreme were modchips produced for the Nintendo Gamecube, each acting as an IPL replacement, with 128Kb and 2Mb programmable ROM receptively. It was the beginning (after of course the tmbinc IPL replacement) to all modchips and software backup loaders, since it was the first modchip/code to ever patch the optical disc drive to read DVD-R discs. The ViperGC was originally released in December 2004, with it's successor, the Extreme, in 2006. Although they came blank from the manufacturer, a bios (Cobra BIOS) was created by the group "MentalCube" to play backups and load homebrew code. It was rumoured that MentalCube was in fact the team (or individual) behind the hardware as well, which I was lucky enough to confirm in mid 2007. There was a rumoured gold plated version of this modchip also, but it was either never produced or perhaps never distributed. 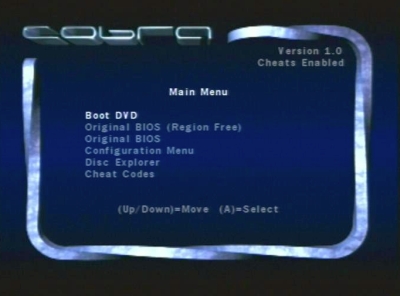 ViperTemporaryAudioFix! 1.1 - only needed for the early versions of Cobra Bios (<1.0)

Viper GC Ripper 1.0 - As riptool.dol doesn't work with Viper GC (no proper init code?), I made a special Viper Ripper program, based on the ipl replacement by tmbinc (you can also use the other ipl replacement features such as sending dols).

Well I guess there's what the USB SDK is for.

Which is incomplete... you have to write your own usb send and recieve functions.
But when you did, you can use it nearly as an usbgecko.

I'm writing an own usb uploader for it.
infact

Infact, did I ever mention you are awesome?

Just a heads up, the "ViperUSBWin7Driver.zip" ends up freezing Viper USB Flasher, just use the driver included with "ViperFlasherUSB10.zip" it works with Windows 7.

i moved your post to an appropriate topic.
please search before you ask - a lot has been discussed already!
(or use google with "site:gc-forever.com *term*")
http://is.gd/MDmZcr

liquitt wrote:i moved your post to an appropriate topic.

Anybody have any luck streaming ISO's using ISOStream with Cobra 2.1?
Top

No I tried all of them, everytime I get an error at the gamecube BIOS.
Some technical stuff:
Gamecube DOL-101 PAL
Viper GC extreme with cobra 2.1 flashed and sdload as plugin
gamecube is hooked up to a cupture card
using the original usb cable on a usb 2.0 port

I wish they would of completed their release before releasing, It would be nice to make sure your backup isn't corrupted, before wasting a disc.

Yes, the isostream feature has been in alpha stage back then and they never released a stable version.
The problem is we cant easily improve this to a stable stage in cobra, but it is possible to rewrite it and then use it seperately or maybe add it to swiss.
infact

If you could release some of your stuff you wrote...

Here is the whole tool package for the ViperGC Extreme

This is all included in the Cobra 2.0 archive in post 1

Riku64 wrote:Just a heads up, the "ViperUSBWin7Driver.zip" ends up freezing Viper USB Flasher, just use the driver included with "ViperFlasherUSB10.zip" it works with Windows 7.

Should work for 64-bit Windows 7. Untested on 32-bit (unless that's your test

The USB streaming tool works with some of the games, however both memory card slots must be empty.
If you forget a memory card in the console, all the streamers will just hang forever and nothing will happen.

It would be nice to have some new working software to play with, but the speed probably is not going to be very good.
Gamecube DOL-001 (EUR)
Viper GC Extreme + Cobra 2.1
SD Card Adapter
Top

Hello as you will see, I have a problem, I purchased a gamecube with viper modchip gc, comes with gcos 1.x I would like to update the bios to Cobra 2.1 with Sdload A & B.vgc but the problem is that I can not read me files vgc .
I have SDGecko and I've tried on there and I get unknown file file, please help me I'm desperate...

First off, sorry for necromancing an ancient thread. I'm in the same situation as psyco752. I came into a cube with a vipergc that had gcos 1.5 flashed to it but no programmer. It had some water damage but I cleaned it up and got it running with a spare dvd drive from another cube. Its going strong and gcos is just fine for my purposes but I'd really like to play with cobra.

Are the cobra vgc files still encrypted? Wouldn't it be possible to run the cobra bios as a dol file? Without a programmer I'm s$%t out of luck right? Right now I boot swiss off a dvd but I wait and wait and wait as the disc spins up and gets me to my sd card. My other option is to load swiss from my network but the guides on that are woefully inaccurate/unclear (although that may be because my only time to work on this stuff is at the dead of night).

If I'm stuck with gcos then thats ok, my xenogc cube gets most of the love anyways.
Top

I might be able to dig up a programmer and send it off to you since there's no way to flash the BIOS other than via Cobra.

Sorry to bring up a dead topic but i just bought a viper gc extreme new in the box with everything. I wanted to ask how much are these things worth these days and how much were they when they were new and still in production. Its a nice modchip very well bulit just like the qoob. The guy i bought the chip from also has a icedcube full case replacement which I'm trying to come to a fair price for it.
Top

I got my viper extreme somewhat between 2006 and 08. I think it was 50€, german price. No idea how much it was in the US.
I also bought a bunch of the normal viper gc chips, they were 30€ if I am correct.

You'll propably find people willing to pay around 200$ for a brand new one nowadays. (Just an estimation from my side.)

The Viper Extreme is a really powerful chip for the cube.
It allows you to rip games fairly quickly and it is the only chip (as far as I know) that supports actual safe states (freeze game status) for the cube.
This, the big hype around it and beeing sold out quite quickly make the viper extreme such a desireable piece today.

I think I have a bricked viper extreme somewhere laying around, I should try to get it back to life

I also have an icedcube case. It is more a show and shine piece in my opinion.
12cm disks fit juuuusst barely in there, I have constant problems with the disc scratching somewhere in the case because there is such little room for for the disc.
I have already tried so much to get around this but with no success yet. When I carefully close and tilt the lid in the right direction it kind of works.

Since 8cm DVD-Rs are still available today, I'd recommend you to get a bunch of those and just use the regular case. If you want have a serious number of games available, the drive replacement with SD card would be the better solution than using discs.
The Icecube looks damn cool though

I've had a Viper GC Extreme for many years along with an IcedCube case. Although the Viper is a powerful modchip, I've found it somewhat unreliable for creating backups and it seems a little worse than a XenoGC for reading them. As far as the IcedCube case goes, I added some washers to lift up the DVD drive which helps to stop the discs from rubbing.
Top
Post Reply
154 posts