Difference between revisions of "Viper GC"

Viper GC & Viper GC Extreme were modchips produced for the Nintendo Gamecube, each acting as an IPL Replacement, with 128Kb and 2Mb programmable ROM receptively. It was the beginning (after of course the tmbinc IPL replacement) to all modchips and software backup loaders, since it was the first modchip/code to ever patch the optical disc drive to read DVD-R discs. The Viper GC was originally released in December 2004, with it's successor, the Extreme, in 2006.

Although they came blank from the manufacturer and were advertised as a "coding platform", a bios (Cobra BIOS) was created by the group "MentalCube" to play backups and load homebrew code only days after the hardware was released. It was rumoured that MentalCube was in fact the team (or individual) behind the hardware as well, which I was lucky enough to confirm in mid 2007. There was a rumoured gold plated version of this modchip also, but it was either never produced or perhaps never distributed. 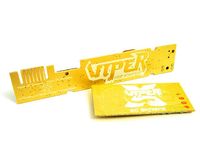 As posted on xbox-scene Wednesday 24 November 2004:

Viper GC is the world's first amateur coding module for NGC. The onboard flash memory allows users to boot Homebrew applications, loaders or BIOS'. A high speed parallel port programmer is provided along with the FFC cable to connect to the Viper GC main module. An intuitive PC application has been authored to facilitate easy transfer of BIOS', loaders or Homebrew applications to the flash memory. Viper Gc is based around the Actel ProAsic Plus FPGA, providing flexibility and security to ensure that the user gets the product they ordered, not a cheap clone.

The viper GC's tailored PC application will enable users to transfer code via their PC Parallel port to the module's flash memory. We're sure that the recent Homebrew developments (like GC-Linux) on GC will take advantage of the Viper GC's ability to run code directly from flash memory, instead of the current BroadBand Adaptor/Phantasy Star Online + Loader solution, leading to rapid development of the GC Scene. The Viper GC has just 4 wires to solder and two connectors which could assume control of the lid sensor switch, should the appropriate commands be included in a third party BIOS release.

Viper GC is more than a BIOS replacement, it offers the unique possibility through special hardware commands, to run the original BIOS after the user's loader or Homebrew BIOS has been executed. The Viper GC programmer includes a logic I.C. to increase transfer speeds and a DIP switch to enable or disable the module. We're sure that the GC scene will now explode into action with a plethora of new achievements and devlopments certain to make even those who do not have a GC currently, rush out and buy one :)