blizzz wrote:Would it be possible to use a GBA as a controller like with the original GBP disc? I think this actually transfers a program to the GBA. So I'm not sure if this is something that can be done with Homebrew, but it would be really nice.

This was planned since the beginning, but may take a while to materialize.
Top

Extrems, a big THANK YOU!!!!!!
You have no idea how much the GameBoy Player has troubled me for 12 years with that crap interlaced, blurred, and stuttering mess. I downloaded the latest version yesterday for my first try, and everything is perfect. I have 240p on my standard def. TV through S-video. No sound glitches, no stuttering, no blurriness, just pure perfection!! I also like theres nothing but black borders. Though to be honest, it would be sweet to add custom borders!! Would contribute my own art for this.

I heard there was supposed to be lag, i think?
Theres no noticeable input lag here.
THANK YOU SO MUCH!!!!!!
Top 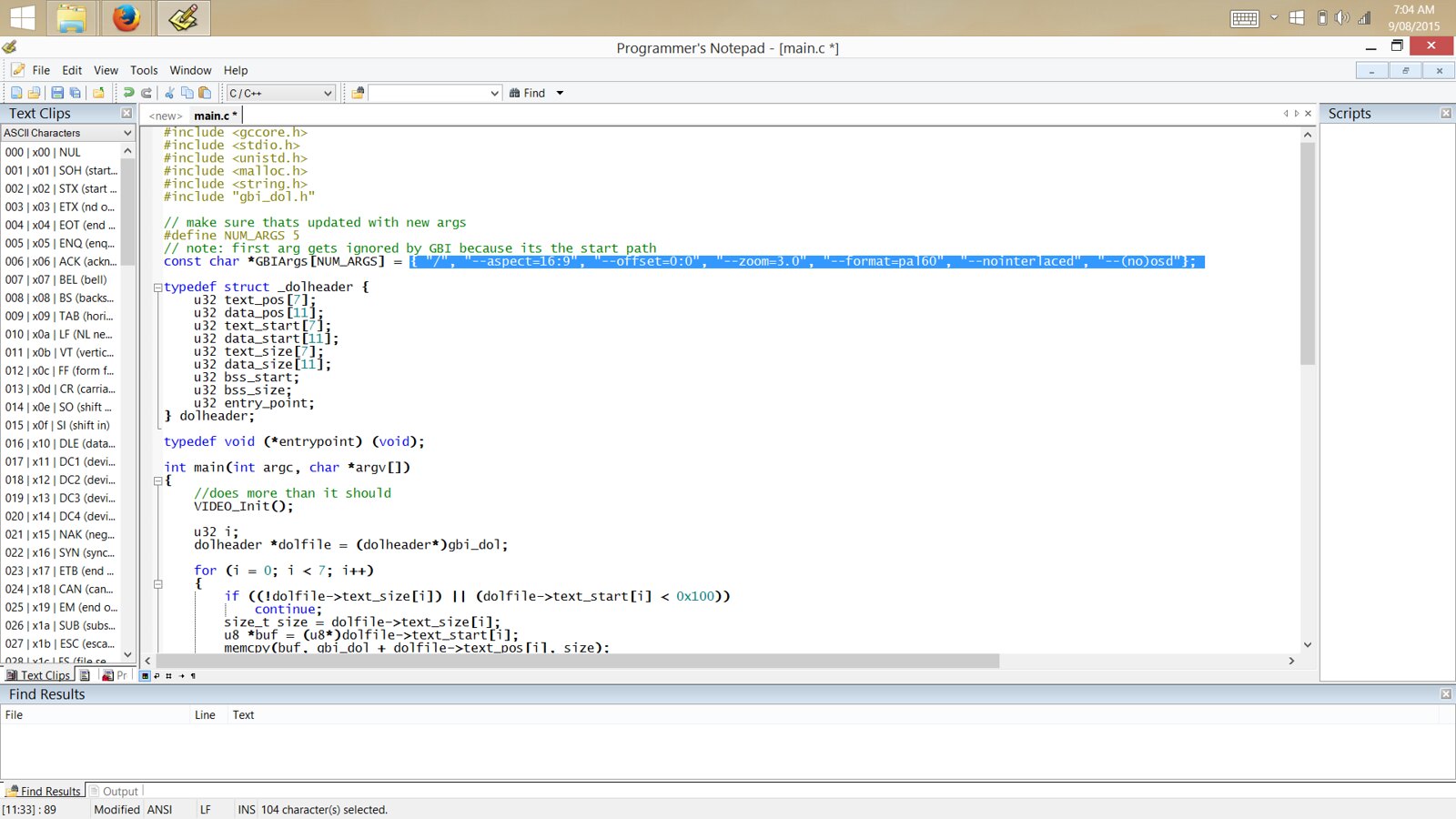 any glaring stupidity in my arguments?
Top

Wow, this is amazing, I can't believe I'm only finding about this now. Great job, I was hesitant about getting a gameboy player because they have become pricey when including the disc, but using the disc being able to use our app would be rather silly!

Thank you very much!
Top

oh also fyi NUM_ARGS should be 7 for it to be proper.
Top

Thanks for the newest release, Extrems!

Any chance you can update your ISOS to the latest relase? =)
Top

oh also fyi NUM_ARGS should be 7 for it to be proper.

I do not know what this means
Top

NUM_ARGS just above the GBIArgs array should be the number of elements in that array.
Top

I plan more for this, but first I need to know if it works, I don't have the gb player (yet) and my gamecube is not connected right now (I normally use my wii).

UPDATE: my previous uploaded dol was broken, I thought it was dolphin not being able to run gbi, but it was just my silly mistake.

Here's an improved supposedly working version (can't test without gbplayer, but should work)

check update 3!
https://www.dropbox.com/s/fkzddp5i5sj4r ... A.rar?dl=0
Let me know if it works, if it does I'll try adding auto detection of slotA/B for config file and configuring on the fly before booting (I might start working on this right now)

ps: I'll upload the source when I know it works, it is originally FIX94's code after all

UPDATE 2: I made the version that can also change arguments no the fly. Controls might be a little cryptic though.

Tomorrow I'll test detecting sdgecko in slot A or B before attempting to load the config file. Then I guess all work would be done, I hope this works fine.

UPDATE 4: I've written a simple tool to inject a conf_gbi.txt file to gbiargs.dol, and it will load it as default. Only windows binary, but source is included for any linux/mac user.

Everything I wanted to code is done, now I just hope it works with no issues.
Top

Hey there. This project caught my eye, and I might be able to make a useful contribution.

Super Smash Bros. Melee contains an exploit which allows for arbitrary code execution using a crafted save file. This allows you to load any code/data you want into the game without the need to modify your system. It would likely be possible to store the dol for this in a SSBM save file and boot it using this exploit. I think this would be fantastic for speedrunners who do not have the expertise to mod their system. If any developers would like more information on this, please find me on Twitter (dansalvato1) or Skype (dansalvato) and we could discuss feasibility.
Top

that sounds like the absolute most convoluted way to boot homebrew, especally when the media launcher exists.
Top

I think it sounds great, just need a homebrew-enabled BC Wii to put it on there, and I can guarantee you they've got one.
Top

Sorry, I'm out of the loop as far as GC homebrew goes. How easy is it to acquire the hardware, and is there no modding required? If it truly is straightforward to go the standard route, then something like booting an exploit may not be worth the effort. But Extrems is right that that's all it takes, and the save file can even be copied by vanilla means. So it's an option.
Top

Does ULL have widescreen support? If so, do GB/C games automatically resize themselves or do I need to unstretch the picture if I switch to one of those? I plan on using the Framemeister to expertly zoom in and have the game take up as much space as possible and keep square pixels, someone on shmups forum said that was perfectly doable. Well, that renders my app useless, but it's cool to have it on swiss, and configurable nonetheless!

Still had fun coding it, so meh. I just hope that functionality wasn't there before I coded it, that would make me feel really silly

Edit: I checked the git, it was 4 hours ago

The feature was just finished. I added support for passing args to dols and emu_kidid went all out to add a nice menu that goes along with it.

Diminuendo wrote:that sounds like the absolute most convoluted way to boot homebrew, especally when the media launcher exists.

The NTSC-U version of the SD Media Launcher has been sold out for around a month or two now- searching for it will redirect you to the PAL version. Since the disc is region-locked, it's no longer a good option to point people to. I haven't seen any on ebay, so they're not common either.


dansalvato wrote:Sorry, I'm out of the loop as far as GC homebrew goes. How easy is it to acquire the hardware, and is there no modding required? If it truly is straightforward to go the standard route, then something like booting an exploit may not be worth the effort. But Extrems is right that that's all it takes, and the save file can even be copied by vanilla means. So it's an option.

Given what I said above I think this would be a great option. It would also be the only free homebrew offering AFAIK (though of course not general-purpose), since everything else requires an action replay disc or modchip of some sort. As you said it should be a nice option for speedrunners, at least assuming it's relatively easy for you to make.
Top

I also think it's a good free solution, since most people have melee, with a dol launcher with embedded dols multiple hombrew could be used with a single save file (unless there's a limit to the smash's 11 block save).

Could Swiss be booted via this method?
Formerly Mizumi
Top

This first release may be imperfect. To activate, go to VS. Mode and Name Entry.
Look at the inner ring on the shiny side of the disc for matching version.

A clever name and proper guide to come later.

The kinks have been worked out and NTSC-J is now supported, probably.

Use dol2gci to convert your favorite homebrew, with "boot.dol" as input filename.
Top
Post Reply
1593 posts