I don't know if this is the correct place to post this.

I know it will take a while to see this feature, but I want to talk about the error I researched and found on current memory card backup and restoring apps (especifically GCMM and it seems Dolphin emulator too). I hope this error can be prevented in the development of this feature in Swiss.

The problem it's that there are a few games that doesn't store the strings at 0x0 (0x40). My game it's Zelda Twilight Princess Japanese version. It stores the strings at 0x2400 (0x2440). When GCMM and I think Dolphin emulator too tries to restore the data on the memory card the data gets corrupted because by some reason I don't know, they save the 0x3c string offset as 0xFFFFFFFF, that address doesn't exist so I think the GC IPL captures the I/O error and just don't show strings nor banner and icon. Would it be that this 0x3c register is ignored and GCI restoring code just assumes it will be always 0x0.

I noticed this because I backed up a save, then restored it with GCMM, it appeared corrupted, backed up the corrupted save, then took both save files and erased the header. Finally I 7-zipped both files without header and they had the same CRC check. So the corruption happens in the header, at 0x3c. I think Dolphin emu have the same error because if I restored the GCI on a blank .raw MC file it appeared exactly as it does on the GC, without the strings, banner and icons.

I will attach my memory card files where I did the research.

UPDATE: The Dolphin error doesn't seem to be this one but may be related to the 0x3c offset. I exported a corrupted restored save in dolphin and noticed that from address 0x2040 everything is erased by putting "00" on each byte. I will talk about this issue on Dolphin Emulator forums later.

I forgot to say I've learned the way Memory Card GCI files are structured by reading "Yet Another GameCube Documentation", p186.
Top

Have tried softdev's sdmc also?, I seem to remember reading back on tehskeen a few of the memory card managers caused curruption.
Top

Once compatibility becomes (a bit more) stable in swiss I will work on this.

kevstah2004 wrote:Have tried softdev's sdmc also?, I seem to remember reading back on tehskeen a few of the memory card managers caused curruption.

I ran it and noticed it have pretty nice GUI, which showed game icons, and I was happy because it could dump the entire memory card as raw data (that I should try in Dolphin emu).

But when I backed up my Zelda game save and made an entire memory card dump I got a totally corrupted Zelda save (even the header was corrupt) and 1KB size .mci memory card full dump (The MC is 4 Mega size). Worse I don't know the official site of this tool, I've tried tehskeen.com but only appears an unrelated store (jailbreak PS3?).
Top

tehskeen has closed down now for over a year and softdev has quit his gamecube / wii coding even longer since. When I get around to writing a memory card manager I will keep this in mind (Jap Zelda).

emu_kidid wrote:Once compatibility becomes (a bit more) stable in swiss I will work on this.

I want to say that the error I explained above happens on GCMM. The error in Dolphin emulator seems to be different.

However it seems both errors happens on game saves that have the description strings offset value with a value different to 0x0, so this 0x3c header register deserves some attention when developing this feature.

I hope this can help.
Top

interesting facts.
I managed to make Metroid Prime JAP work on an NTSC_U memory card.
but for Zelda_WW he asks to format the card.
Why does Metroid save, and Zelda_JAP doesn't? it seems that the explanation is given in this post ...
I saw that the Text option in Swiss was removed from the menu.
Now, will the card reading be automatic, will all JAP games be able to share the same memory card?
for Prime JAP, it was possible to create a save on the same memory card.

I checked and Wind Waker isn't asking to format, it's asking to create a file.

There isn't even any kanji, how can you not read this?
Top 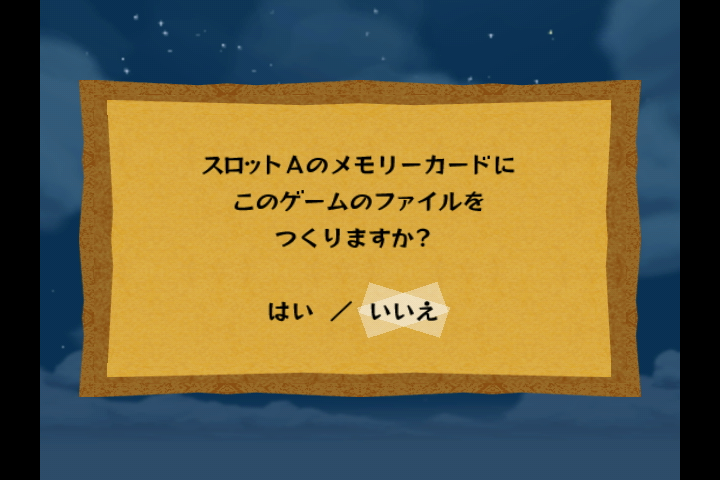 There's only hiragana and katakana here. No kanji.
Top

There's only hiragana and katakana here. No kanji.

In my opinion, from what I was able to test; keep Slot B of the virtual memory card blocked by an empty Gecko. This will prevent corruptions.

It also seems that when doing the IGR, the last rescue is corrupted when there are two virtual slots in Arcadia Legends, and Metal Gear ... That for SP2, by slot-b everything seems to be in order.