Snes9xGX for the Nintendo GameCube "4.3.3 VM" Unofficial by me 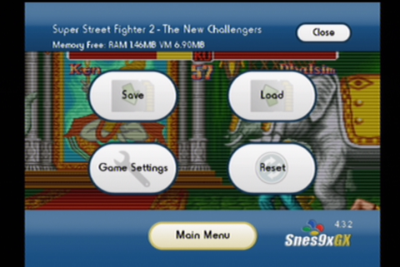 This version can save and load SRAM, SAVE STATE and preferences in MEMORY CARD SLOT B? The CHEATS file can be loaded by the DVD as well as ROMs? Thanks.
Top

Not sure, give it a shot.

I was unable to compress this DOL to send to Qoob Pro. The process hangs at 97%. I checked and only happens with this file. It will take a while until I write an executable ISO. Thanks for the answer.
Top

Why not put Swiss into your Qoob and start it from there ?
Top

Streetwalker wrote:Why not put Swiss into your Qoob and start it from there ?

I've never used Swiss because I only use my original dvds and 1 dvd with SNES Roms. Even putting the Swiss, I will still need to write an iso anyway. The SNES9X GX 4.1.1 is still the best option for me. Thank you for your help.
Top

You could put your ROMs on a SD card, start the emulator via SWISS and load the ROMs via your Gecko in slot B.
Last edited by badsector on Mon Apr 27, 2015 12:39 pm, edited 1 time in total.
Top

Swiss isn't just a backup launcher. I highly recommend using it even if you don't use backups.
Top

I know all the capabilities of Swiss today. I just own a Gamecube with qoob Pro, 2 Memory cards (SNES saves / Games saves). Never needed more than that. I should have put it before. This DOL also did not work at the Dolphin here. I always test before burn.
Top

As you wish. Loading homebrew from an SD card is extremely convenient though. No more discs to burn (which is a pain the the ass if you ask me

I must be the only one here who loves burn discs. What I hate is the XenoGC (many problems in the past). I made a post about it in the section on modchips.
Top

Eh, I use a XenoGC clone myself.

I finally tested this, works perfect. Thanks emu_kidid. It can't be compressed with dollz, though
Top

Rebuilt this one too, should be better performance than the last one since it was built before the GCC version with regressions and I used LTO as well. Check the first post to grab it.

The version 4.3.3 can be compressed perfectly. Too bad the file is too large (4.842KB) for qoob Pro. I tested other versions. 4.0.4 works well for me. It seems that starting from 4.0.0 there is a problem accessing the files after a while. I think that only happens to me. Thank you for this new version.
Top

File access starts to die cause I believe there are still out of memory issues happening sadly.

I did not expect an answer on this issue. 2 things happen here:

1 - I carry a ROM and after a while (+/- 1 hour) when I load another ROM, the disc is inaccessible. When I put the disc again it is not recognized. This does not happen with versions below 4.0.0. Perhaps related to the option "turn off disc"?

2 - When I save and load frequently (save state mostly) in the normal memory card, a black screen appears forcing me to reset. This is the problem of memory you quoted? Thanks.
Top

1. Sounds like an issue with the disc drive not being started up again properly.
2. Yeah, memory leak somewhere.

You already tested the version 2.0.1b8? I found in eurasia.nu. Great emulator. I solved my problem to load the ROMs after a while and automatically loads the SRAM(here I had to activate the save function also for work). The only problem I had was with the message of insufficient space. But I solved the problem by placing a file of 8 blocks of any game(I use a memory card only for SNES games). Sorry if I posted in the wrong place.
Top

emu_kidid wrote:Rebuilt this one too, should be better performance than the last one since it was built before the GCC version with regressions and I used LTO as well. Check the first post to grab it.

Will test soon. As always, thanks!
Top

will the 8mb rom support be ported to the wii version?
Top

Fairly sure it's already in the Wii version.

So far, so good! I couple of bugs i have found:

Performance is a bit better, not on the same level as 4.2.8/4.2.9 (SuperFX games are the best example as they can be decently played in those old versions) but it is better than 4.3.2 Sometimes the background is lost when loading roms. After that even the white part is lost, visible in the file browser and any menu section. I did this by loading Star Ocean -> Tales of Phantasia -> Star Fox. Also happens when you load Star Fox 3-4 times consecutively. The selection in this screen is inverted (really old bug, by the way)

Small request, emu_kidid: can you add compatibilty for roms like Classic Kong (http://www.romhacking.net/homebrew/62/) and X / Nes Glider (Alpha) (https://www.youtube.com/watch?v=aCNt8EAIWGM). It says "Invalid File Size". This games can not be run on the Wii version either


powerpuffboysz wrote:its not or at least not in 4.3.2. it said invalid rom size

You sure? I tested Tales of Phantasia and Star Ocean, both run fine on my Wii
Top

Mr emu_kidid, just a quick question, could you share which liboGC version you used when compiling your 4.3.3 version?
Top
Locked
70 posts