A Region Switch is a hardware modification for the Gamecube to bypass regional lockout protection and change native language support on Gamecube hardware versions NTSC-U (USA) and NTSC-J (JAPAN).

The IPL (Gamecube "BIOS") of these two Gamecube versions offer support for both English and Japanese languages, but not at the same time. A Region Switch can be enabled or disabled to allow support for playing import USA or Japanese original Gamecube titles, respectively.

This modification is completely unnecessary when using Swiss, as the region and Memory Card format is managed by Swiss.

Note: Backup discs require use of a modchip or by other means.

The Gamecube's Memory Card data format is determined by the console region. While NTSC-U and PAL save data can typically be stored on the same memory card, memory cards used with NTSC-J consoles must be reformatted to Japanese settings or data corruption can occur. A separate memory card should be used for each region to avoid data corruption and/or loss of save data. 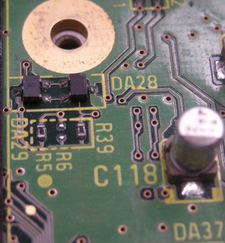 NTSC-J motherboard shown with
no resistor at R6

To allow an NTSC-J(Japanese) Gamecube compatibility for use with NTSC-U (USA) original titles, a modification to resistor location "R6" is required.

At location R6, two solder points can be seen where the resistor was not installed during production. By closing the circuit's path (shorting the two points), the Gamecube region will be changed.

These two points can be soldered together for a permanent region change or an on/off switch can be installed to allow region interchangeability. If using a switch, the switch should be set to the desired regional position prior to system power up. 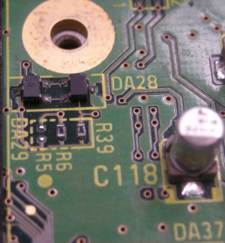 NTSC-U motherboard shown with
no resistor at R5

Same steps for hardware modification as described above.
To allow an NTSC-U (USA) Gamecube compatibility for use with NTSC-J(Japanese) original titles, a modification to resistor location "R5" is required. 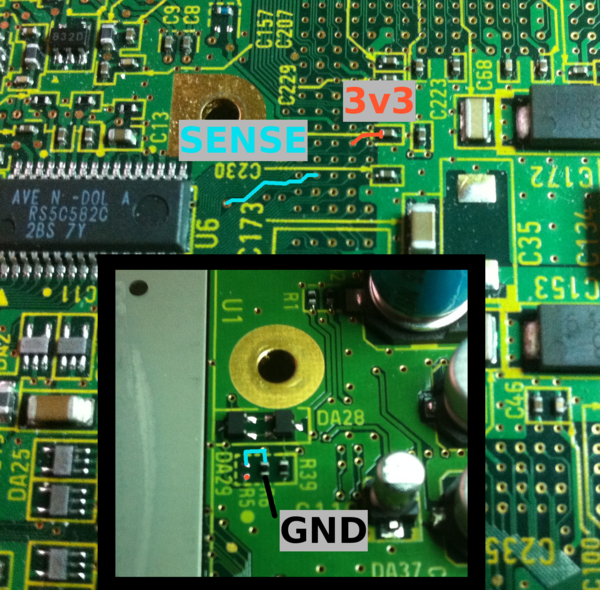 Sense, 3v3 and GND shown from Top and Bottom view of Mainboard


NOTE: 3v3 shown for illustration only and can be provided from any 3v3 location to Sense